Wow. Now I know this was probably to be expected, but now that it’s come, it feels pretty sudden. Today Steve Jobs stepped down as the CEO of Apple for the second time, and most likely, for the last time. 🙁 It’s probably safe to say that the whole internet (more or less XD) is abuzz with the news and most people aren’t taking it too well (eg Wall Street lol).

I dunno if I’ve said it much before, but we are complete Apple nuts in my household. My father has been with Apple since the beginning; since the original Macintosh computer and has NEVER deviated since then (currently rocking a MacBook Air XD). When I bought a Windows PC for my university studies, I almost got evicted from the family. ^_^;

It’s really hard to put in perspective how much Steve has personally contributed to the sheer ‘concept’ of personal computing (and by extension now, the concept of post-PC computing), but it’s probably safe to say that he is without a doubt one of the pioneers and forefathers of most of the technological customs we take for granted today.

Now, it’s been said he’s not leaving entirely and he will be remaining as Chairman of the Board, so it’s quite possible that this isn’t going to be as bad as everyone is making out. Odds are he’ll still be making sure all of the products leaving Apple are still up to his level of standards, and that the rest of the responsibilities of managing the company will now rely on Tim Cook. So all in all, I really don’t think Apple is going to rapidly change much at all now, or in the perceivable future.

In any case, since now is as good a time as any, I would personally like to thank Steve for everything he’s done, and I wish him the very best from here on. 🙂

So. The iPad 2. Looks shiny. I can’t believe it’s been a year already since the last iPad was announced. XD

I really love my iPad. I’ve had such a great time with it over the past year. ^_^
I was initially skeptical if getting another iOS device that simply had a bigger screen than my iPhone was actually worth it or not, but it turns out it was. The extra screen realestate can be used very effectively and it’s simply a lot easier and quicker to be able to look at more content at once than the iPhone.

One thing that stood out on the iPad over a laptop that I noticed was the sheer portability of the thing. With a laptop, you can’t really carry it when it’s on. You have to either set it down, or really awkwardly hold it, usually balanced on one arm. XD With the iPad, I could quickly load stuff up, rotate the screen as needed, and if there are friends present, you’re not tied down to the ‘crowd around the screen’ mentality.

END_OF_DOCUMENT_TOKEN_TO_BE_REPLACED

Well… I was going to write a blog post on this before it came out, but ‘lo and behold, it came out a few minutes ago.

I’m downloading it now, but in the meantime, I’d like to just put out my own thoughts on what I think about it:

In my opinion, if it’s executed well, it might be a good idea, but knowing Apple’s philosophy, I think it might already be doomed for failure.

The concept of the Mac App Store seems pretty cool; it’s just like Steam but for everything! XD
It can provide a central hub accessible to all where any number of apps can be very easily located and downloaded. These apps can then be automatically updated as new versions come out.

Given my own experience when writing and marketing my Twitter utility, DesktopTweet, this is a totally awesome concept.
I was running around the internet trying to find Twitter related blogs and wikis that would let me post an article about DesktopTweet (On that note, nearly ALL of my traffic is coming from the official Twitter Apps wiki) in an attempt to market, and even still, I doubt I made much of an impression. Secondly, I had to write my own series of metrics and update tracking code for it so I could see what kind of people were downloading it, and so I could automatically inform them when an update came out. If my experience with the iOS Store is anything to go on, all of this stuff is provided straight from the start.

So, with that being said, I’d say the concept of the Mac App Store is totally awesome, and I may even go so far as to say it’s a potential game-changer for software on the micro-computer platform.

But, with all that being said and done, I do have a few reservations about it:

If the Mac App Store is anything like the iOS App Store, it may be doomed to failure.

END_OF_DOCUMENT_TOKEN_TO_BE_REPLACED

Well, AUC dev/world/ 2010 is finished and I’ve finally found a bit of time to update my blog hehe. XD

So I just wanted to say, it was really awesome. I’d never attended a programmer-centric conference before and the whole experience was pretty epic.

Of some of the presentations/activities that were going on, some I attended included:

END_OF_DOCUMENT_TOKEN_TO_BE_REPLACED

I’m sitting in the domestic Qantas club now. 20 minutes until the gate opens so I thought I’d write a quick blog. 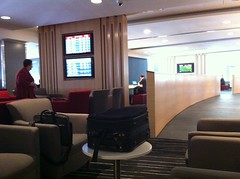 I feel very honored and privileged to have been selected by my university to attend the annual Apple University Consortium DevWorld conference that will be happening this week. ^_^

There’s an extremely interesting schedule lined up including a day long primer on Cocoa, a cool sounding talk on git as well as a lot of cool Apple-centric presentations in general.

Just like my trip to Japan, I’m not sure how much blog time I’ll get, but I’ll try my best to post any cool stuff I learn on Twitter.

To all the folks in Perth, enjoy the Royal Show!

Again, same deelio with the photos. I’m SERIOUSLY considering buying a DSLR camera with good low-light sensitivity for next time. ^_^;

Whew… sorry for the late post. I was pretty much straight home and into bed last night. Words could not describe the level of knackery I was feeling. 😛

Anyway, quick rehash of how it all went down:

Rocked up at 7:30 again. It was a few degrees warmer this time, but still darn near freezing point. XD This time I brought gloves, but my feet froze haha. Going to go back and work on my Perth winter wardrobe… XD
A few volunteers weren’t able to make it this time, so the tasks got re-allocated a bit. Thankfully my posting didn’t change; back into the seminar room for more crowd control! XD

I’ll see if I can do another re-cap of the new guests this time as well: