Whew… would you believe I’ve been so busy that this is the earliest I could get around to doing this was now…? XD

Anyway, the second day of Wai-Con was really interesting too. A lot more panels were being held on Sunday, and I think for this reason, the place seemed slightly more crowded than before. I spent most of the morning keeping watch in the game room, venturing out every now and then to just wander around and see what was happening. 🙂

Come the afternoon, it was time for the Japanese 101 panel. @jetha, @deathwombat, and myself had volunteered to be the panelists with @sonictail hosting it. The point of the panel was to introduce some facets of studying Japanese as well as some points of Japan itself, and answering any questions. Overall, I think the panel was a resounding success. We were going head-to-head with the Eminence panel so I was reeally expecting the room to be empty. ^_^; But that was not the case, with a very impressive turnout. Overall reaction to the panel seemed quite positive with a few people coming up afterwards and telling us what they thought.

To follow up on the panel for anyone who still had questions or for people who missed it, I also created this continuation thread on the Wai-Con forums:
http://www.panic-wa.org/forum/viewtopic.php?f=18&t=3803

Finally, at the end of the day, as we were all packing up, I was pretty sad to see all of it go hehe. I caught the last few minutes of the closing ceremony and it was really cool to see all of the main committee members get recognition for all of their hard work.

After everything was finished, all of the volunteers and committee members went and had dinner together. It was all a great deal of fun, and I was even lucky to get a photo together with Yasunori Mitsuda from the Eminence table. He was a really cool guy and he said he was loving Perth very much. ^_^

So overall, Wai-Con was great fun. It takes a ridiculous amount of passion and dedication to pull off an event this huge and it was definitely cool to help out in some small way.
In the aftermath, I made a few new friends on Facebook, a few new friends on Twitter and have been having fun hanging out on the Wai-Con forums.

Can’t wait until next time. 😀

Well Happy (slightly belated) Australia Day folks! In 1788, the English First Fleet landed at Sydney Cove and started the first British penal colony on Australia. My, have we come a long way since then. XD

Since I was out in the countryside until the evening, I didn’t really feel like traveling out to the river to see the fireworks. When I talked to my friends, they all said they had the same feeling. ^_^;

I’m getting the feeling that a lot of people are starting to think you’ve seen one fireworks display, you’ve seen them all. I wouldn’t be surprised if the only people visiting the foreshore these days are either tourists or families with young kids… particularly after alcohol was banned. XD

On that note tho, I’m quite glad that alcohol got banned this time around. The amount of violence that occurred at this Australia Day was actually extremely low. Lack of alcohol is a small price to pay in exchange for that. 🙂

Anyway, I thought I’d do the ‘patriotic’ thing and just wish everyone a Happy Australia Day. Be proud you’re Australian and do your best to uphold our morals. 😀

Whew! Just got home 30 minutes ago… really tired, but I thought I’d try and crank out a blog. XD

So for the unfamiliar ones, Wai-Con is Perth’s premiere anime themed convention that’s usually held in January each year. Aside from a host of stalls selling all kinds of anime/manga/Japanese merch, there are also a lot of cool events such as drawing panels and such, a dedicated video games room and a freakin huge cosplay competition. XD
For the past few years, I’ve usually just picked a panel or two I liked the look of, just went to them, and then nicked off after… not this time. XD

I got a message from a friend who is one of the co-ordinators last week, saying that there is a slight shortage of volunteers and asked if I’d like to help out. I was already considering volunteering from before, but after hearing there was a shortage, I knew I had to jump in. 🙂
So, this year around, I was an official volunteer for Wai-Con, mainly helping out in the games room, but also a few odds and ends elsewhere too. And I must say, it was a pretty awesome experience. 🙂

END_OF_DOCUMENT_TOKEN_TO_BE_REPLACED

Wheeeew. You can really see the dust on this thing. XD

Truth be told, I wasn’t thinking of writing another post on this blog. Thanks to the latest WordPress updates, most of the code I’ve written has broken, and this thing’s currently teetering on the brink of total collapse. O_o

But, given the time, I thought I’d write one last post on here. After this, I have a new blog deployment lined up, but that can wait until next year.

So here ends the last day of 2009! But not just that, this also marks the end of the first decade of the 21st century. How about that hehe. A lot of stuff has happened since 2000 and when I reflect back on the fact I was still a junior high school student back then (and now a uni graduate and full time worker) it really puts it into perspective. I don’t think I’ll really try and cover all that stuff, but I”d like you to stop and think about what you’ve achieved in the past 10 years.

END_OF_DOCUMENT_TOKEN_TO_BE_REPLACED

Well……. it’s the last day of 2008 today. Damn that was quick!! O_O
I’m always a little saddened when the current year ends, but I’m also looking forward to the new year around the corner.

In any case, I figured I probably should do a little reflecting on the stuff that’s happened.
-This is the first year I’ve spent doing one constant full time job for the entire length of the year.
-Thanks to my job, I’ve picked up many new skills including better web design, introduction to MOSS, not to mention a lot of office lifestyle.
-Production of RPG-X2 wound down with 2 patch releases.
-The UberGames site was made live after 4 months of work.
-I set up and starting writing in this blog.
-UberGames releases SteamerCard onto blogs and Facebook.
-I got an iPhone and haranged everyone at work about it. XD
-I finally relented and bought a Wii and an Xbox 360 next-gen console.
-I volunteered to help work on a small scifi TV production.
-I joined a Perth community of Japanese language/culture exchange.
-I undertook the JLPT 2 exam to help bolster my Japanese.
-2 of my cousins got married (One older than me, one younger xD )
-My grandmother passed away after a pretty long fight with cancer. I miss her terribly.

There have certainly been some very good highs in this year, and some very terrible lows… some of which I will not forget quickly. Thankfully, I can say that everything that happened, probably happened in the best possible way it could have, and so I try not to let those bother me.

I had a pretty simple new year’s resolution for 2008: Get better at Japanese. At this point, more or less… I think I managed to get that far hehe.

And now for the next year…. I think I have a new one in mind, one which seems fitting given the current circumstances: Make myself more employable.
It’s a pretty vague resolution I know, but then that makes it very flexible. In any case, this will probably mean more Japanese study, not to mention starting to study the latest computer technologies and their languages coming out as well. 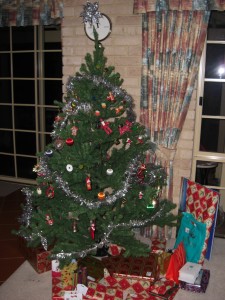 Well, Merry Christmas everyone! I know it’s only halfway over for most of the world still, but it’s pretty much over here!
I’m reeeally tired, so I won’t go into what happened today too much, just… I think it went quite well. 🙂
We had a great time over a Christmas breakfast and a Christmas lunch, and then had the relatives over for a nice Christmas feast for dinner. 🙂

The spirit of Christmas was truely here today, and I was glad to be with my family to spend it.

P.S Also, an Xbox 360 in the stocking went pretty nicely as well. XD