Well now. Given recent events, I think it’s fair to say that I feel like I understand the intricacies of international copyright law a little more than I did a couple of months ago. ^_^; After my communications with the TPCI lawyer, coupled with some readings from some other sites concerning similar copyright cases, I thought I’d write up a bit of a clarification of how this stuff appears to work.

MANDATORY DISCLAIMER: I am not a lawyer, and the following text is my own supposition. It shouldn’t be taken as absolute truth, and if you see something you know is incorrect, please let me know.

So, the crux of the matter is that ‘fair use’ is a rather convoluted and complicated ‘convienience’ clause added to copyright law, with the original goal of (subjectively) ‘limited’ re-use of copyrighted material without needing to get the original holder’s permission primarily for purposes of  things like critical commentary or research. With the existence of the fair use clause, this basically means that most forms of unauthorized copyright usage go from ‘blatently’ illegal to ‘potentially’ illegal. ^_^;

END_OF_DOCUMENT_TOKEN_TO_BE_REPLACED 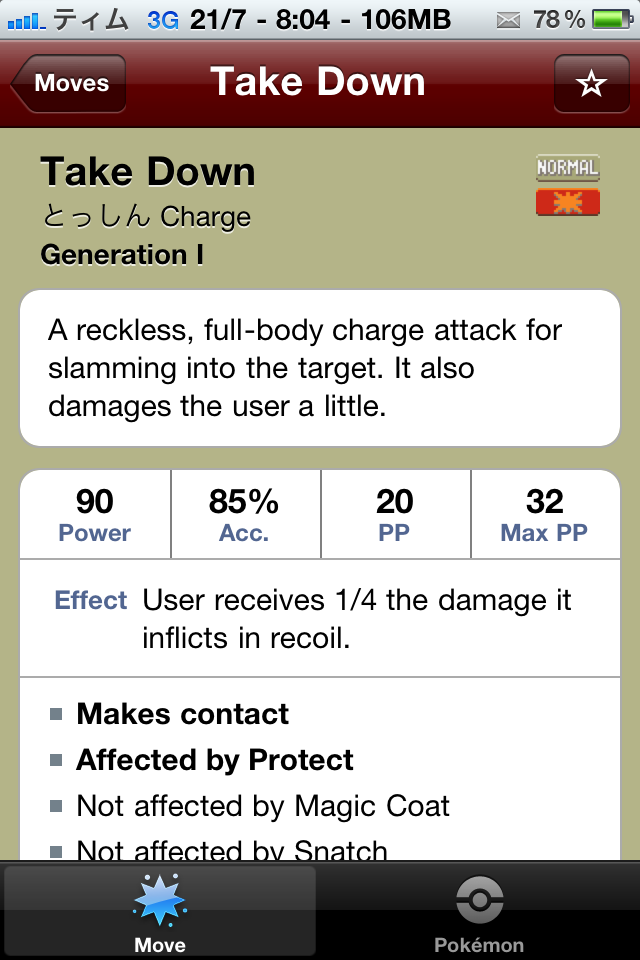 As of last Friday, I had to pull iPokédex from active distribution and leave it offline indefinitely, by personal request of a representative of The Pokémon Company International.:(

I’m really disappointed it came down to that, but sadly, there doesn’t appear to have been any other option.

Since I was slightly busy on the weekend, it’s taken this long to follow up on the matter here, but now I’ll see about putting up what’s been going down since my last blog post.

After receiving the notice from Apple, I immediately followed up by sending this email to the address they provided to me:

END_OF_DOCUMENT_TOKEN_TO_BE_REPLACED

Well. It finally happened. Since it’s been more than a month after I heard about it happening on Android, I was wondering if it ever was going to happen on the iOS as well… but it looks like it finally has. ^_^;

On Saturday morning, I received this email from Apple:

At this point, I’m not surprised at this message. It’s been a long time coming.

I am quite disappointed about this though. 🙁
I find it quite amazing that TPCI would be wanting to shut these kinds of apps down. If the reviews of iPokédex are any indication, the Pokémon brand has been enhanced by these fan productions. Some people have even said that iPokédex is what got them into Pokémon in the first place. ^_^

I would also say that as long as these apps aren’t trying to generate profit, they shouldn’t be causing any damage at all. There was previously an argument that 3rd-party Pokédex apps could interfere with the sale of strategy guides, but given there is now an official Pokédex app for the 3DS that is also free, I’m really not sure about that. ^_^;

At this stage, I’ve replied to Apple acknowledging the message. I’ve also promised that if I cannot resolve this within the 5 days, then I’ll personally be removing iPokédex from active distribution for an indefinite period.

From here on, I’ll be getting in touch with the Pokémon Company International to see if I can clarify the nature of this copyright infringement, and if there’s anything I can do to fix it.

For the time being, I’m choosing to remain optimistic it’s possible to work something out. 🙂

But in the meantime, if you haven’t already downloaded iPokédex, get it while you can. If I need to take it down, then the time is set for Wednesday evening.

Blimey! It really is hard to find the time to write a blog. ^_^;

I covered this in my intro to iPokédex post a little bit, but I’d like to go into more detail about certain aspects of the app. In this case, I want to talk about how I got the idea of making a Pokédex app into my head. XD

My original motivation for building iPokédex came around at the end of 2009. At this point, I’d gotten mighty addicted to my import copy of Pokémon HeartGold, but I was finding it quite frustrating in certain points. With now over 493 Pokémon, I had no idea what half of them were, what their movesets were or how to evolve them. And not only that, but since the game was in Japanese, even the ones whose names I did know got me confused. XD Ultimately playing the game (even in Japanese ^_^;) was doable, but it meant I needed to have a strategy guide on hand for those unexpected moments. My trusty iPhone 3G and an open browser window to Bulbapedia worked in a pinch, but since Bulbapedia wasn’t designed for Safari on a tiny smartphone screen, getting to the right info usually took a bit of time. At this point, I started thinking about a native iPhone equivalent Pokédex app…

At around that time, I discovered Pokedex on the iPhone App Store. At 2 bucks it looked to be a hefty investment (Well. As far as iPhone apps go XD), but I took the plunge hoping it would be worth it.

END_OF_DOCUMENT_TOKEN_TO_BE_REPLACED

Well. iPokédex has been out for a week! And so far, I am VERY pleased with how it’s been received. ^_^

Using a combination of statistical data collated by both AppFigures and Google Analytics, I’ve managed to learn this about iPokédex’s usage:

END_OF_DOCUMENT_TOKEN_TO_BE_REPLACED

So yeah, Apple approved iPokédex midday Sunday, and I got it all set up Sunday evening.

I kinda failed epically with the icon there. I thought Apple would add the gloss effect like they did in the app, but apparently not. And you can’t change it until another release update.

Anyway. If you have an iPod touch or an iPhone, go grab it now! 😀

Tell me what you think!