Hoo boy. Talk about your crazy epic prep and packing frenzy. The last thing on my todo list was to write a blog on what’s goin’ on, and I finally got to it. XD

I’m writing this post on a plane, currently flying out of Hong Kong and headed for Kansai, Japan.

Earlier this year, a fellow ECU student and myself were very lucky to receive scholarships to attend a study seminar in Kobe. The seminar will be focused on ‘multicultural symbiosis’, and will run for 2 weeks. It will consist of a lot of pretty interesting activities, including hanging out with a host family and going to make soba noodles out in the countryside.

Since I was very fortunate to receive a similar scholarship back in 2006, I’m extremely honored to be chosen again for another one and plan to do the very best to represent my university, and Australia as a whole. 🙂

Now… the last time I went to Japan, I tried to blog about the stuff I did everyday, but found out that there simply isn’t enough time to do that. ^_^;

So this time, I plan to leverage the latest social media tech to the extreme, and post updates as a go along. This will probably consist of Twitter updates and Foursquare checkins as often as possible (But hopefully not up to spam levels haha).

I learnt from my past trip to Japan that using global roaming on one’s iPhone is a VERY BAD THING TO DO, and this time, I’ve tried renting out a 3G SIM card from DoCoMo, which I’ll report back on here on how well it goes.

Anyway, the plane’s about to land. I’ll be posting this the next chance I get.

The newest addition to the Pokémon  line of games is finally upon us, HeartGold and SoulSilver. It was released in America a few days ago and will be released here in Australia in a few days time. When it came out in Japan last year, one of my Japanese teachers was able to pick me up a copy and bring it back over, of which I’ve been playing ever since. ^_^
At the time, my blog was offline, so I figured I’d hold onto this lovely post until the time of the English version release, where people might find some of this information useful (As opposed to posting it during Japan’s release, where it would be all but forgotten by now). 🙂

When my Japanese teacher was on exchange with some students in Japan, I emailed her and asked if she could pick up a copy of the new HeartGold over there. I chose Gold over Silver since Silver is what I got for the GBC originally, and wanted it to be different than before. She said she checked out a Sofmap on her last day there, and found this copy of HeartGold, which was the last one they had. Suffice it to say when HeartGold/SoulSilver came out, they were selling like hotcakes!

END_OF_DOCUMENT_TOKEN_TO_BE_REPLACED

Whew! Just got home 30 minutes ago… really tired, but I thought I’d try and crank out a blog. XD

So for the unfamiliar ones, Wai-Con is Perth’s premiere anime themed convention that’s usually held in January each year. Aside from a host of stalls selling all kinds of anime/manga/Japanese merch, there are also a lot of cool events such as drawing panels and such, a dedicated video games room and a freakin huge cosplay competition. XD
For the past few years, I’ve usually just picked a panel or two I liked the look of, just went to them, and then nicked off after… not this time. XD

I got a message from a friend who is one of the co-ordinators last week, saying that there is a slight shortage of volunteers and asked if I’d like to help out. I was already considering volunteering from before, but after hearing there was a shortage, I knew I had to jump in. 🙂
So, this year around, I was an official volunteer for Wai-Con, mainly helping out in the games room, but also a few odds and ends elsewhere too. And I must say, it was a pretty awesome experience. 🙂

END_OF_DOCUMENT_TOKEN_TO_BE_REPLACED

Here’s a little story on my ever ongoing Japanese language escapades. XD
I got in a little hot water in my weekly Kumon Kokugo lesson over the importance/neccessity of Kanji. XP

As always when advancing to the next level at Kumon, I took a diagnostic test to guage my Japanese skillz. My results were pretty good; 100% on all sections (w00t!) bar one; written Kanji… where I got 0%. ^_^;

My tutor was somewhat confused about the apparent contrasts in scores, and asked me what happened. I didn’t really think about what I said, but just blurted out “I don’t really have any drive to learn to write Kanji”, as to which the reaction I received was somewhat of mortification.

END_OF_DOCUMENT_TOKEN_TO_BE_REPLACED 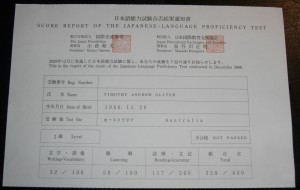 I’m not going to dwell on this long, but I figured I should make a note of it.
The results for the JLPT arrived in the mail today.

The cutoff mark was 60%, and I managed to achieve 228/400 marks. This equates to about 57%… making my passing grade off by 3%.
So, of all possible ways you can fail an exam, this one is probably one of the more painful ones. It is the one where you fall short of passing by only a few short sweet steps.

If I was to fail, I’m rather wishing I had gotten 10% instead haha. That way I would have known I didn’t have a chance at this exam at all. But so close to the pass mark, it’s making me wonder if I just had sheer dumb luck, or if I had tried any harder I would have passed.

In any case, I don’t think I really want to have passed just scraping the bottom anyway haha.

So, the question remains… what to do from here…? 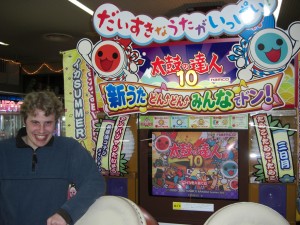 I’m a bit slow, I actually arrived back in Australia on Tuesday morning, but it’s been pretty hectic since then with unpacking and stuff.
Anyway, Japan was awesome! I got to ski a lot, eat and drink tonnes of awesome stuff, meet up with old friends, go out and sing karaoke, as well as just going out and buying tonnes of nerdy crap for prices way lower than Australia.

So we basically arrived in Yuzawa on the Monday of the first week, and from there on, we spent until Saturday skiing at the NASPA ski resort. My dad and sister hadn’t skiied in 10 years so they spent a good amount of time rolling down hills, which resulted in epic lulz most of the time. XD
Yuzawa hasn’t changed one iota since I worked there in 2007 and the whole ordeal made me a bit nostalgic haha. maybe next year I’ll try and go back. 🙂

After Yuzawa, we went to Tokyo and stayed at a guest house in Asakusa. While there, we sightsee’d some various places, went and had dinner with some old friends and did tonnes of shopping. I spent a hefty bit of time in Akihabara of course pouring over the insanely geeky merchandise. However, since I recently managed to obtain a modchipped Wii, the main thing I did there was buy second hand games for it.

After Tokyo, I caught a Shinkansen down to Osaka, where one of my buddies from English school very very graciously let me crash at his house for a few days. While there, I visited the old English school I worked at, hung out with some good Osaka buddies, did some shopping in Den Den Town, as well as got drunk and had some nights out the town。

Either way, being back in Perth is a bit of a bittersweet feeling now. I really hope I can go back there for more than a year at some point hehe.

In any case, my idea for writing a new blog post every day was epic fail haha. There wasn’t enough time each night, so I’m hoping the fact I took around 600 pictures will help a little bit. XD

Hehe, ah well, as far as holidays go, that was awesome. 🙂

At the moment, I’m busy uploading photos to Facebook and mixi. If you’re on my list, please check them out!