Well, I’m pretty much packed now. Off to Japan!

I hear the whether is pretty cool over there right now. So much so that a little snow is even falling in Osaka.
Anyway, I have a great many things to do over there, including catching up with friends, lots of skiing, as well as lots of buying heheheh. XD

My plan is to try and update the blog as I go, half so people can see the crazy crap I’m up to, half so I can have a diary to remember this trip by.

I’ll also see about adding lots of pictures as well, both to here and my Facebook and mixi.

Until then, see you later! 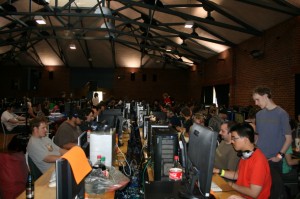 The exam is over.

There was lots of kanji.

And there were lots of really complex words.

I need to practice this crazy language more.

But… I’m remaining cautiously optimistic that I did alright. XP 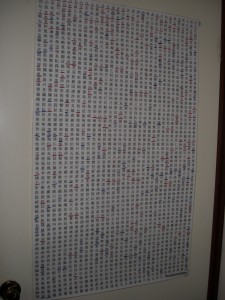 Studying for this exam has been pretty damn weird. I don’t really know if there is a clear-cut way of trying to cram one’s head with 1000 Chinese symbols and 3000 words in just under a year, and if anyone knows of a really good way for next time, please tell me hehe.

I spent the majority of today pouring over my kanji chart updating it with the kanji that I learnt from Kumon in the interim, the practice exams and from my iPhone’s kanji trainer. All in all, I know roughly 350 symbols now, so we’ll see how that goes.

At the moment, I’m feeling very ambivalent towards this. Not really nervous… but not excited either. That’ll probably change tomorrow, but here’s hoping my feelings are the right ones for this kinda thing.

Either way, I think I attained what I wanted out of this exam, and that was motivate myself to improve my Japanese ability, even if it was a little. Because of this exam, I went to town with my Kumon lessons, I sat down and watched tonnes more Japanese TV than I normally do, I took part in several interesting Japanese events around Perth and made some new friends, as well as I just sat down and wrote stuff… which I usually don’t do… ever. I’m hoping this is becoming apparent in the Japanese entries I’ve written on this blog as well hehe.

That being said, passing it would be icing on the cake, but I won’t be very disappointed if I don’t.

Well… apart from the fact that I’d probably have to go through all of this again next year as well. XD

To all of my friends I know who is doing the JLPT exam as well this year (especially the crazy hardcore ones doing JLPT1!!!), I wish you the very best of luck!