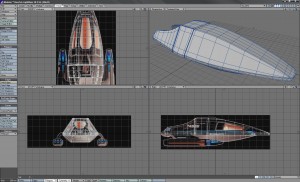 Apologies for the lack of updates. I still really have no idea what to put on this thing that wouldn’t be better off on UberGames or my Twitter. XD

So it’s been a pretty quiet few weeks. Easter blew over quite nicely. I spent the long weekend in front of my Xbox eating chocolate easter eggs, and going to the gym doubly so since then hehe.

Anywhoo, aside from my work on UberGames (which is going slow and arduosly for the time being… more on that later ; ) ), I’ve been at the reins of LightWave recently, working on a small personal project as well as gearing up for some more work on Welcome to the Cosmos.

So the first thing I’ve been working on is a small bit of modeling practice… a 3D mesh of a ship from Star Trek Voyager, the Type 9/12 speedboat shuttle. 😀
It’s something I’ve been wanting to try for a while, and hopefully it’s not going to be too hard to do. At the moment, I’ve laid down the main shape of it using Subdivision Surfacing in LightWave, and am busy refining the edges and adding more detail. Once that’s done, I’ll start to freeze it off, optimize it and then start texturing it. 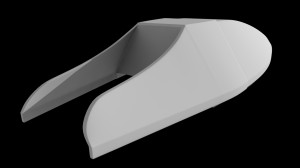 But, I’ll need to put that aside for now, since a more pressing bit of CG work has come along.
I’ve been commissioned now to create a temporary shot for WTTC that can be used in any of the promotional screenings of the episode before the main edit is complete. The shot in question is one of the ones later on in the episode, and it takes place over one of the cities in Australia. Krell has just ejected from his ship and is plummeted down in front of it. At the moment, all we really have is a really rough storyboard animatic, so the final look is still probably somewhat up in the air. 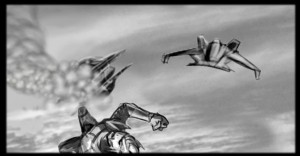 Even though it’s a temporary shot, I’d like to try and put as much effort as I can into it to see how polished we can make it. 😀

From this point though, it’s going to require a bit of research, and a bit of resource collection. I’ll see if I can continue to post updates to it here as I go.

Anyway… that’s all for now hehe.

Hmmm… last of all… I’m still wondering. Just putting work up here, I’m probably not using this blog as effectively as I could. I might do some scooting around and check a few other blogs too… XD